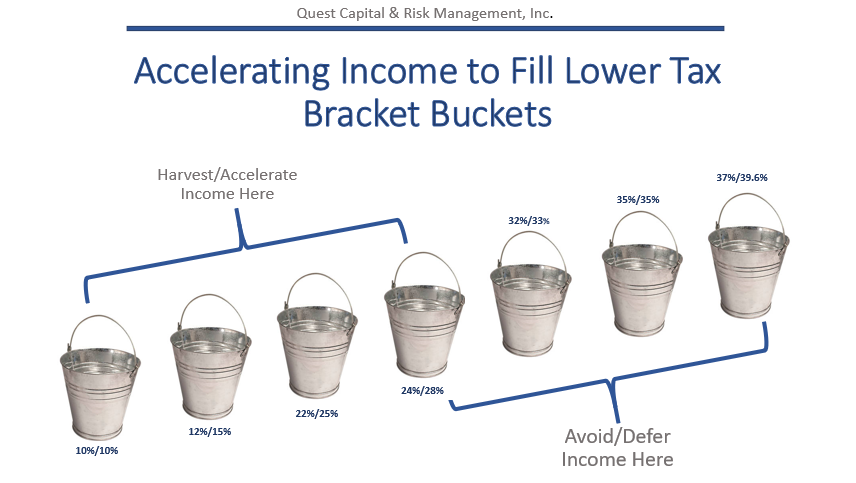 Beginning in 1998, taxpayers have been permitted to both contribute to a Roth IRA (subject to income limits), and to convert existing assets in a traditional pre-tax IRA to a Roth IRA. In 2006, under the Pension Protection Act, the Roth rules were further expanded to allow conversions of pre-tax 401(k) plans directly to a Roth IRA. And in 2010, further provisions took effect eliminating Roth conversion income limits altogether, allowing anyone with a pre-tax retirement account – IRA or 401(k) (or any other employer retirement plan) – to convert to a Roth IRA (or even intra-plan to a Roth 401(k)).

Notably, though, while the Roth conversion rules are often discussed as though an entire IRA or might be converted, the reality is that there’s no minimum or maximum regarding how much must be converted. In other words, a Roth conversion doesn’t have to be all or none; it’s up to the investor/taxpayer to decide whether to convert or to simply do a “partial Roth conversion” instead.  Of note when discussing Roth conversions is that as of December of 2017’s Tax Cut and Jobs Act, the re-characterization of Roth conversions (which allowed you to “change your mind” and unwind the conversion) is no longer allowable.  Roth conversions are now permanent; they should always be considered in the context of an overall Retirement income and investment plan and should be coordinated with your accountant or other tax professional.

The virtue of doing a Roth conversion is that once converted, subsequent growth in the account can be spent tax-free as a qualified Roth distribution in the future (there is a waiting period that should be understood prior to converting).  Basically, this allows you to pay tax on the seed, rather than the harvest! The caveat, of course, is that doing the Roth conversion forces the value of the account to be reported as income today, triggering an immediate tax liability. To come out ahead, the current marginal tax rate at the time of conversion should be lower than what the future marginal tax rate will be.

To illustrate the strategy of accelerating income today to avoid higher taxes tomorrow, think of filling up your current tax bracket "bucket".  For example, if you are in the 12% bracket currently, and you could have additional income of $40,000 before you are pushed into the next higher bracket, consider making a $40,000 partial Roth conversion today, paying the tax on it today in your lower tax bracket bucket, to avoid the 15% or 25% or higher tax bracket buckets in the future. With the Tax Cut and Job Acts set to Sunset (expire) in 2025, it is our belief that there is a good probability of taxes returning to their previous higher rates.   And, as our earlier blog post mentioned, with people retiring with larger and larger retirement accounts, and with the advent of age 72, we see the likelihood that retirees may be pushed into higher and higher tax brackets due to larger Required Minimum Distributions than they ever expected!

Of course, given that there’s only so much room to convert until the higher brackets are reached, this means the bulk of one’s IRA may remain in pretax form. Yet given a multi-year – or even a multi-decade – time horizon before one would need to spend/use all the money, this isn’t necessarily a problem. It simply means you will carefully consider on a year to year basis where the opportunity may be to repeat the partial Roth conversion in the future as well, continuing to whittle down the size of the pre-tax IRA (and grow the size of the Roth IRA), while ensuring each year that the conversions are modest enough to avoid ever hitting the top tax brackets.

Repeated partial Roth conversions help avoid ever being subjected to top tax brackets. It also has the added benefit of pairing down the size of your traditional IRAs or Retirement Plans, thereby reducing the future Required Minimum Distributions (as there are no Required Minimum Distributions from Roth IRAs).  In theory, then, the goal of partial Roth conversions is to find a balance, where the converted amount is low enough to avoid top tax rates today, but not so little that the remaining retirement account balance plus compounding growth causes it to be exposed to top tax brackets in the future

To learn more about how Roth Conversions may fit into your Retirement Income and Investment Planning, please contact our office!