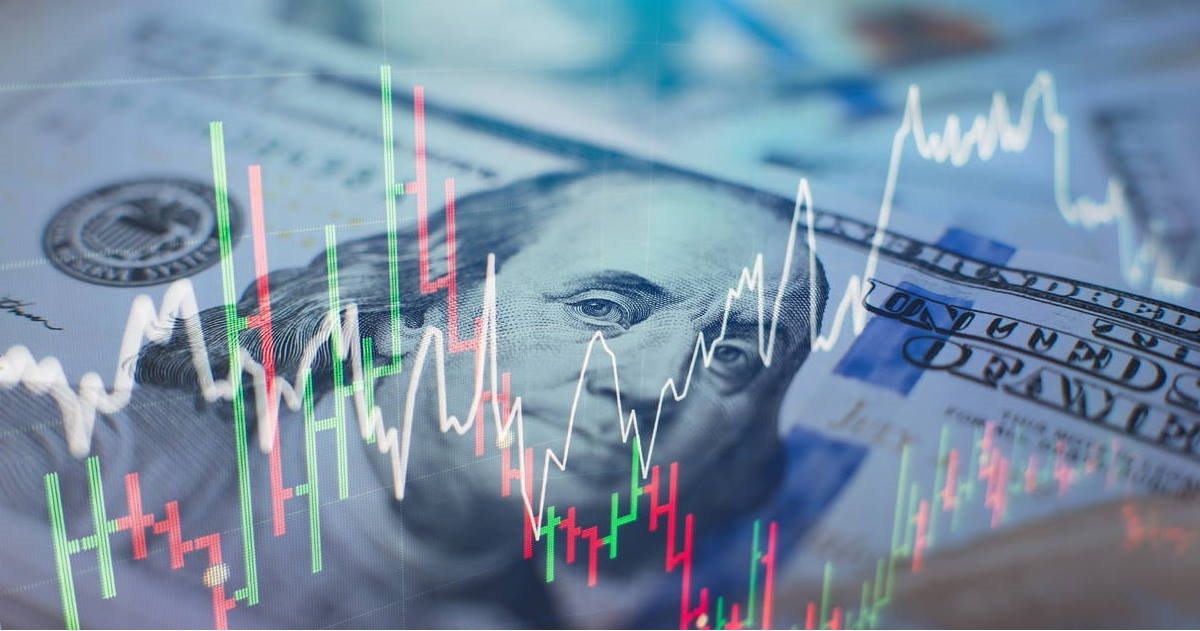 When It Comes to Retirement Funds, What’s Safer--Cash or Stocks?

The following is adapted from Income for Life.

You’re probably familiar with the headlines: Stock market plunges. Sell, sell, sell! Or, It’s a bull market. Get in while you still can! Or, even more mysteriously, Oil prices have dropped dramatically. (What action does that require for the long-term investor?)

Retirees and soon-to-be retirees tune in to financial news hoping for a hint about what they should do with their money, and instead, they’re bombarded with out-of-context, sensationalized content that provides little in the way of actionable information. Consequently, they often make decisions based on misinformation, fear, or anxiety.

It’s natural for retirees to worry about risk. Making it securely through your distribution years can be a daunting prospect. Many think, “It’s taken me a lifetime to accumulate this money, and I can’t lose it. So, what’s the safest place to put my money for the next 30 years: cash or stocks?”

If you want to make a confident decision about the best asset allocation for your retirement plan (without the sensationalism), you’ve come to the right place. In this article, we’ll explore the difference between volatility and risk and then demonstrate just how risky cash and stocks actually are.

Recently, we met with a prospective client who seemed, on the surface, to be well-prepared for retirement. He was in his early sixties and had responsibly saved his income throughout his working years; by the time he started planning his retirement transition, he had well over $1 million in his 401(k), a small pension and social security.

When we began working with him during that first meeting, though, we discovered that the majority of his savings was in cash, CDs, and bonds. He’d followed the popular wisdom passed on to him by his parents and put his money in “safe” places, avoiding the volatility of the financial markets.

“Have you given any thought to investing a portion of your money to stocks?” we asked him.

This is a common response that we hear from some prospects. Most retirees consider money in the bank to be the safest investment. By keeping their money in cash, retirees avoid the risk they detect in investments like bonds or stocks.

However, there is a crucial difference between volatility and risk. Risk is exposure to the chance of loss. With a risky investment, you’re putting money into an investment that may permanently lose all its value.

Volatility, on the other hand, is how rapidly and dramatically an investment tends to change in price. Just because an investment is more volatile doesn’t necessarily mean that it is riskier in the long term. Volatility is only a concern to investors if they need money in the immediate or near-term future.

Cash: Is It Really a Safe Haven?

Conventional wisdom has taught retirees that they have a limited runway to withstand market volatility. As a result, they love to believe that they can put all their money somewhere they perceive to be safe.

With cash assets, you won’t lose your money, and in fact, it still grows. For example, if you invested $1 in a savings account, bank CD, etc. in 1926, that $1 would be worth $20 ninety years later. On the surface, it sounds appealing.

However, this doesn’t tell the whole story.

The top line of the chart, above, represents the growth of one dollar invested in intermediate-term government bonds over 90 years. As you can see, that dollar grows to about $100.00. A retiree may now think that bonds are an excellent investment—certainly, far better than cash, which only grew to $20.00 over the same 90 years. It’s important to note, however, that this top line in the graph assumes that all of the interest payments received from the bonds were reinvested.

The bottom line of this graph shows a dollar invested in the same bonds in 1926, but with the interest income not reinvested, but removed to pay for living expenses. Without that interest income reinvested into the bonds, the investment doesn’t grow to $100; in fact, it barely grows at all! By 2016, your 1926 dollar is worth only $1.68.

Now, let’s go back and think about the cash in the bank and your $1 invested in 1926. If you had to live off of the interest of that investment—meaning the bank interest was removed instead of left to compound over the years—you actually would have lost money!

Relative to short-term market risk, cash and bonds are safe and have a place in your portfolio. But relative to maintaining your purchasing power (the ability to buy the goods and services that get more and more expensive throughout the decades of retirement) having your money in cash and bonds isn’t safe at all. In fact, it’s downright risky.

If you keep your money only in “safe” investments, you are unknowingly setting yourself up for an income that will become increasingly difficult, if not impossible, to keep up with inflation.

Stocks: Are They as Risky as You Think?

Now let’s take a look at an investment often feared to be too risky for retirees to own in any significant percentage. 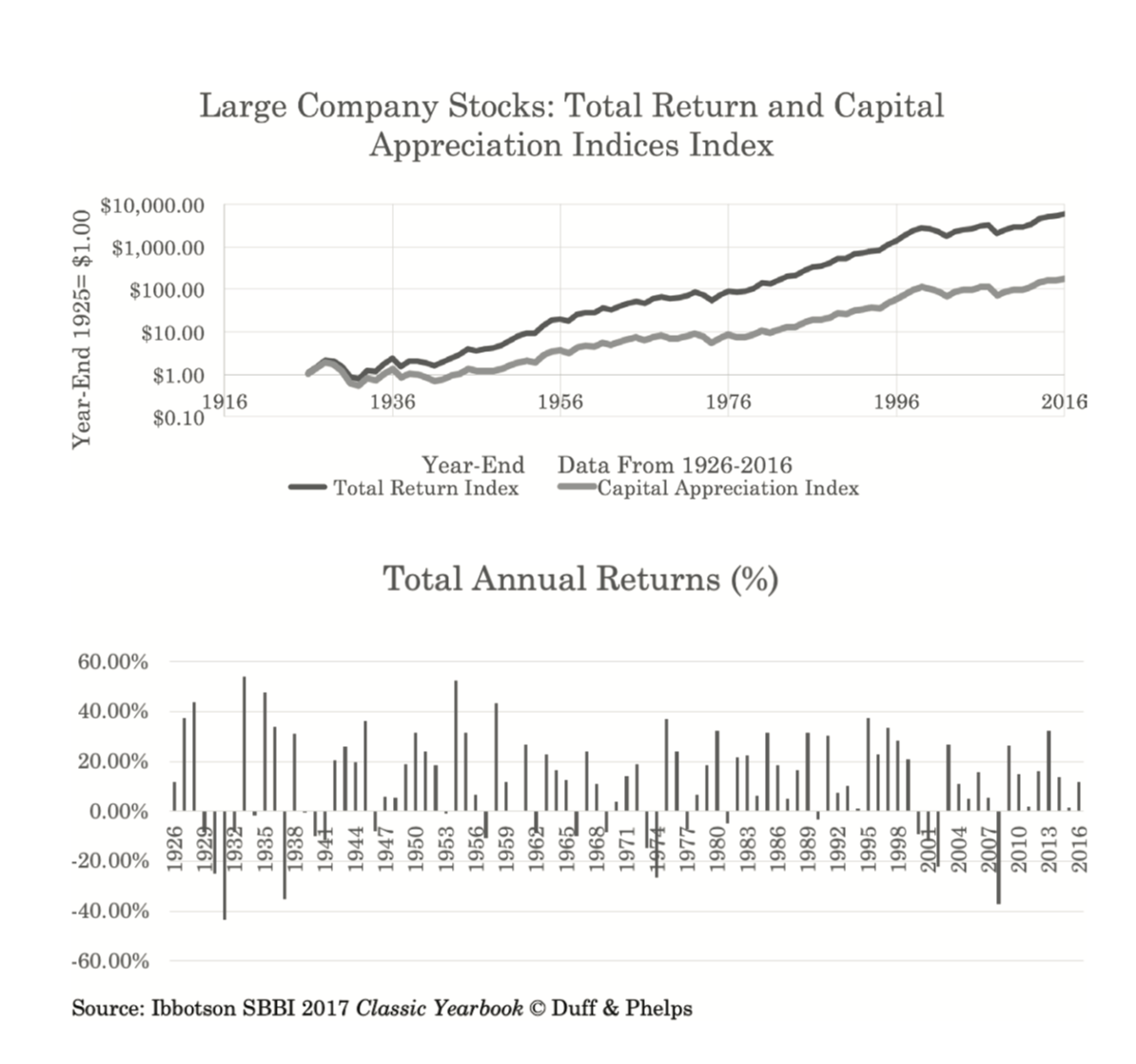 This top graph, entitled Large Company Stocks, shows what happens if a person invests their dollar into large company stocks over the same 90 year period. The growth is significant, especially compared to the growth of both the cash account and bonds examined previously; when capital gains and dividends are continuously reinvested, the dollar in 1926 grows to nearly $10,000 in 2016.

Most importantly, the bottom line of this graph shows that even if this person does not continuously reinvest the dividends, and instead uses that income for living expenses, the dollar in 1926 still grows to $100 in 2016.

Remember, stocks are a form of ownership; they represent participation in a company’s growth or decline. Ownership allows you to participate in the appreciation of a company, where bonds, as a debt obligation, do not. If a retiree can accept the short-term volatility that accompanies stock, they’re much more likely to protect their purchasing power throughout the decades.

So, what’s the safer place for retirees to keep their money: cash or stocks?

In a few words, for money needed in the short-term, cash and bonds; for long-term investors, a thoughtful percentage in stocks.

While the psychology of a typical retiree includes the instinct to safeguard their nest egg in a low-risk investment like a cash account or bonds, we’ve shown that the seemingly riskiest place to put their money—the stock market—is indeed the most likely by far to protect their ability to cover their needs throughout their 20 to 30 year retirement.

It’s important to recognize that the psychology of risk avoidance will likely lead you to make a decision with your money that could hamper your ability to maintain your lifestyle. You will need to accept certain levels of volatility in your portfolio in order to garner the returns that will both keep pace with inflation while also allowing your income to grow.

For more advice on asset allocation, you can find Income for Life on Amazon.